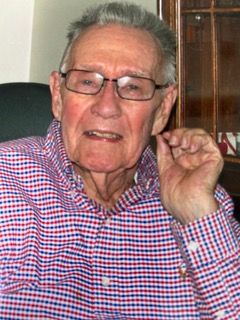 Trevor William Vaughan, Jr., Mt. Lebanon, formerly of Bethel Park, passed away peacefully April 2, 2020. He was born March 26, 1926 in Pittsburgh and was the son of the late Trevor W. Vaughan, Sr. and Frances K. Vaughan. He was preceded in death by his wife of 68 years, Nancyjane Vaughan.
Trevor attended Brentwood High School and was active in sports - track, basketball, cross country but his real love was golf. He was an avid golfer for most of his life. Trevor was a Freemason. He enlisted in the Navy and did 2 tours of duty. Trevor (Pete) was employed by the Pittsburgh Press and retired after 45 years. He, also, began his own business, Trevco Garage Doors.

His greatest enjoyment was vacationing at Bethany Beach with his family and always spending time with them year round. He is survived by his daughter, Nonie Knaus (Bob), Pittsburgh; son, Trevor W. Vaughan III (Ginger), Cecil; son, Mark Vaughan, SanFrancisco. By his grandchildren, Trevor W. Vaughan IV (Steph), Emmaus, PA; Mari Park (Frank), Bethel Park and by his 4 great-grandchildren.

He will be inurned alongside his wife at the National Cemetery of the Alleghenies in a ceremony at a later time.

Memorials may be made in Trevor's name to TOV Church, 1597 Washington Pike, Suite A38 #129, Bridgeville, PA 15017.
To order memorial trees or send flowers to the family in memory of Trevor William Vaughan, please visit our flower store.