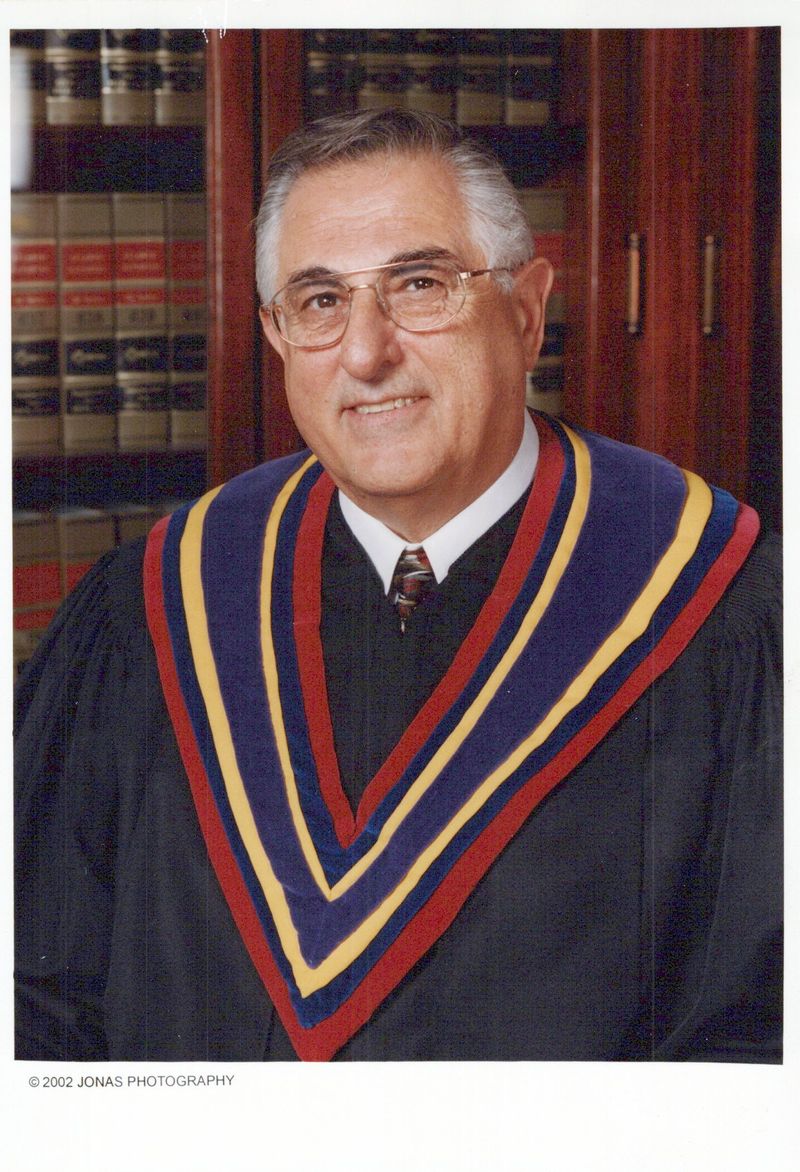 The Honorable Chief Justice Stephen A. Zappala SR, age 88 of Presto TWP, on Friday May 21, 2021. A native of Pittsburgh born on September 26, 1932, a man always proud of his family, he was the son of Frank and Josephine (Andolina) Zappala and beloved husband of Phyllis (Koleno) for 65 years. Father of Stephen Jr (Mary), Kimberly (predeceased), J Michele Peck (Gene), Gregory (Candy), Dana Felix (Patrick J.). Grandfather of Gene Peck Jr (April), Chelsea Gurevich (Mitch), Stephen J., Brandon, Samuel, Michael, Gregory W., Robert, Joseph, Alana and Dominique. Great grandfather of Asher. Brother of Frank (Maureen), Joseph (predeceased), Richard (Nancy) and Charlie (Pam).
Well balanced between academics and athletics he attended Pittsburgh Central Catholic High School playing center on the state championship basketball team. He went on to Notre Dame and Duquesne Universities also participating in their collegial basketball programs prior to obtaining his law degree from Georgetown University Law School in 1958. He served in the military in the United States Army achieving the rank of First Lieutenant and was honorarily discharged. Locating back in Pittsburgh he went into private law practice with his father and brother with a sense and interest towards public service. Commencing with accepting the role of Director of Planning and Development of Allegheny County, he quickly moved into additional roles including Solicitor of the Allegheny County Community College and then Solicitor of Allegheny County. His first election was to the Allegheny County Court of Common Pleas in 1979 and two years later being elected a Justice of the Pennsylvania Supreme Court, the oldest court in the United States. In 1991 he was retained by the electorate for a second term. In 2001 he was elevated to Chief Justice of the Pennsylvania Supreme Court.
Throughout his career he had been recognized for his extraordinary contributions both professionally and publicly. While on the court he initiated, developed, and fully integrated the largest court automation system of its type in the country. His efforts combined and automated systems of the three appellate courts in Pennsylvania making it much easier and efficient for litigants, counsel, and the courts to operate. For the first time ever in the Commonwealth, he created the role of Budget Liaison to the Legislature and he himself served in the role for annual budgetary hearings sharing much detail with the Legislature enhancing openness and transparency of the governmental budgetary process of the Judicial Branch. Outside of his judicial roles he gave much of his time to many organizations including Italian Sons and Daughters of America, Multiple Sclerosis Society, Justinian Society, Knights of Columbus, Italian Heritage Society, and the Columbus Civic Association. He was awarded the Judicial Award from the Pennsylvania Bar Association, the Gold Medal for Distinguished Service by the Order of Sons of Italy in America, Honorary National Chairman of the Italian sons and Daughters of America, the Art Rooney Award by the Catholic Youth Association of Pittsburgh, Alumni award of the Duquesne University Century Club, Man of the year award from National Italian-American Sports Hall of Fame, Man of the year merit award from Columbus Civic Association and Induction into the Central Catholic High School Hall of Fame. Friends welcome FRIDAY 1-3, 6-8p.m., WILLIAM SLATER II FUNERAL SERVICE (412-563-2800) 1650 Greentree Rd, Scott Twp 15220. Funeral Service 11:30 a.m. SATURDAY, Calvary Cemetery Lower Mausoleum. www.slaterfuneral.com
**In lieu of flowers donations suggested to :
Zappala Family Scholarship at Central Catholic High School, 4720 Fifth Ave, Pgh, PA, 15213 or to the Zappala Family Endowment at Duquesne University School of Law, 900 Locust Street, Pgh, PA, 15282
To order memorial trees or send flowers to the family in memory of Stephen A. Zappala, please visit our flower store.