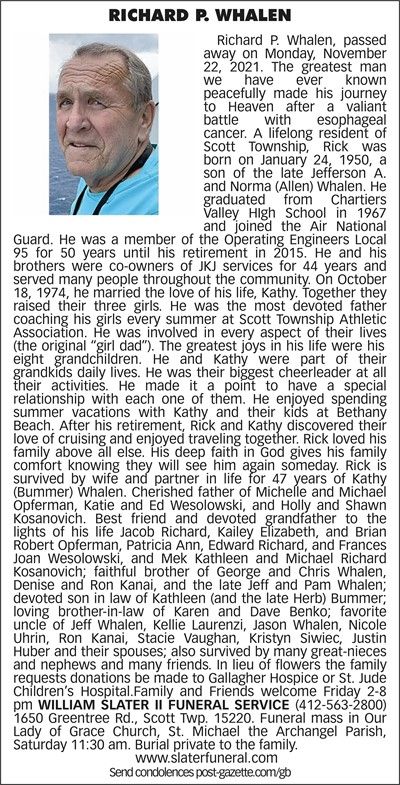 Richard P. Whalen, passed away on Monday, November 22, 2021. The greatest man we have ever known peacefully made his journey to Heaven after a valiant battle with esophageal cancer. A lifelong resident of Scott Township, Rick was born on January 24, 1950, a son of the late Jefferson A. and Norma (Allen) Whalen. He graduated from Chartiers Valley High School in 1967 and joined the Air National Guard. He was a member of the Operating Engineers Local 95 for 50 years until his retirement in 2015. He and his brothers were co-owners of JKJ services for 44 years and served many people throughout the community. On October 18, 1974, he married the love of his life, Kathy. Together they raised their three girls. He was the most devoted father coaching his girls every summer at Scott Township Athletic Association. He was involved in every aspect of their lives (the original "girl dad"). The greatest joys in his life were his eight grandchildren. He and Kathy were part of their grandkid's daily lives. He was their biggest cheerleader at all their activities. He made it a point to have a special relationship with each one of them. He enjoyed spending summer vacations with Kathy and their kids at Bethany Beach. After his retirement, Rick and Kathy discovered their love cruising and enjoyed traveling together. Rick loved his family above all else. His deep faith in God gives his family comfort knowing they will see him again someday. Rick is survived by wife and partner in life for 47 years of Kathy (Bummer) Whalen. Cherished father of Michelle and Michael Opferman, Katie and Ed Wesolowski, and Holly and Shawn Kosanovich. Best friend and devoted grandfather to the lights of life Jacob Richard, Kailey Elizabeth, and Brian Robert Opferman, Patricia Ann, Edward Richard, and Frances Joan Wesolowski, and Meka Kathleen and Michael Richard Kosanovich; faithful brother of George and Chris Whalen, Denise and Ron Kanai, and the late Jeff and Pam Whalen; devoted son-in-law of Kathleen (and the late Herb) Bummer; loving brother-in-law of Karen and Dave Benko; favorite uncle of Jeff Whalen, Kellie Laurenzi, Jason Whalen, Nicole Uhrin, Ron Kanai, Stacie Vaughan, Kristyn Siwiec, Justin Huber and their spouses; also survived by many great-nieces and nephews and many friends. In lieu of flowers, the family requests donations be made to Gallagher Hospice, 1370 Washington Pike, Bridgeville, PA 15017 or St. Jude Children's Hospital, 262 Danny Thomas Pl., Memphis, TN 38105. Family and friends welcome Friday, 2-8 pm WILLIAM SLATER II FUNERAL SERVICE (412-563-2800), 1650 Greentree Rd., Scott Twp. 15220. Funeral mass in Our Lady of Grace Church, St. Michael the Archangel Parish, Saturday 11:30 am. Burial private to the family. www.slaterfuneral.com
To order memorial trees or send flowers to the family in memory of Richard P. Whalen, please visit our flower store.