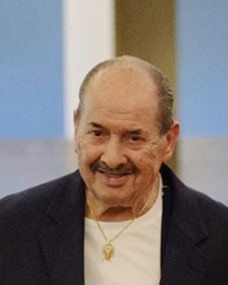 Age 84, of Scott Twp., died on Monday, January 9, 2023.  Born on April 20, 1938, he was the son of the late Luigi and Elizabeth (Silverio) Lamonde. Beloved husband for 64 years to Ella Mae (Russell). Dear father of Mark (Alexis), Lisa and Shawn (Laura) Lamonde. Loving grandfather of Justin (Deanna), Miki (Jake), Tyler (Nicole), Robby (Maggie), Nico and Haylie. Great grandfather of Gavin, Dominic, Mark, Mia, Louie and Maddie. Brother of Jimmy Lamonde, Teresa Luvara, Ellen (Bill) McGraw and the late Louis, Abby, John, Rosemary, and Monsignor Joseph Lamonde. Rege was a proud veteran of the U.S. Navy. He retired from Westinghouse Electric after 38 years of service.  He worked many other jobs throughout his lifetime including, in his younger years, Assistant Equipment Manager for the Pittsburgh Steelers, a long-time usher at Forbes Field and Three Rivers Stadium, TV antenna installer, Umpire, Parking attendant and many others.  He was also a long-time volunteer at Kane Hospital in Scott Township. He was born and raised in the Panther Hollow section of Oakland and was extremely proud of his Italian heritage. He raised his family in the Brookline section of Pittsburgh and spent his later years in Scott Township. Rege was an avid sports fan who was occasionally known to place a wager or two on the outcome of the game, but his true passion was attending the games and events of his children and grandchildren. There wasn’t a more vocal and loyal supporter of their activities. He was truly a “one-of-a-kind” character who left his mark on everyone that he met.  He made many friends throughout his lifetime, and he will be sorely missed. Family and friends are welcome Friday 2-8 p.m., WILLIAM SLATER II FUNERAL SERVICE, (412-563-2800) 1650 Greentree Road, Scott Twp., 15220.  Mass of Christian Burial, Saturday, 10:00 a.m. in St. Elizabeth Ann Seton Church of St. Raphael the Archangel Parish.

To order memorial trees or send flowers to the family in memory of Regis Joseph Lamonde, please visit our flower store.