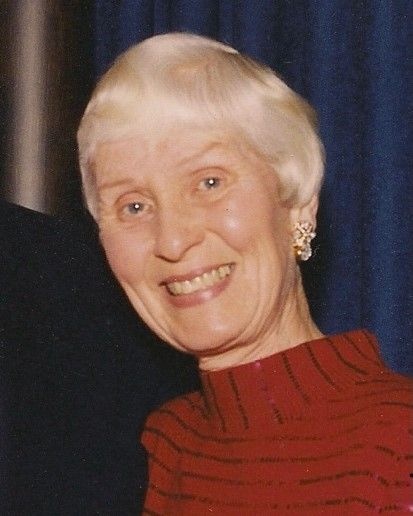 JoAnn Hawkins Queenan passed away peacefully at her home on Saturday, April 10th, surrounded by her loving family, and just shy of her 90th birthday.

Born in 1931 in Sewickley, PA, JoAnn grew up in the small, mill town of Coraopolis, along the Ohio River, near Pittsburgh. Her father, Dr. James Hawkins, was a family physician who cared for everyone in their tiny community. The year before her birth, he delivered the child who would one day grow up to become his daughter's future husband, "Charles J. Queenan, Jr."

As the youngest of three children and the only daughter, JoAnn was doted upon by both of her parents, but she was especially close with her father. Her first words were "da da." She held many happy memories of her early life as a young tomboy, climbing trees, competing with her brothers, vacationing at Lake Erie and playing with the many stray pets her father brought home from his patients. Looking back, she attributed her love and concern for animals to her father, who grew up on a farm, and she credited her mother, Margaret, for instilling in her a passion for gardening and nature.

At the tender age of 12, her world turned upside down when her father passed away suddenly, leaving JoAnn, her mother and her two older brothers to fend for themselves. "He didn't believe in insurance," she once laughingly said of her father.

Despite her loss, JoAnn continued to excel in school. In seventh grade, she earned an award for the highest grade-point average in her class. During the presentation of this award in the principal's office, she first met the handsome, top achiever in the eighth grade, Charles (Chuck) Queenan, whom her father had delivered years before. He noticed "that pretty Hawkins girl" right away and wasted no time inviting her to the September Fair dance at the local YMCA. She recalled being utterly tongue-tied in his presence and embarrassed at not knowing how to dance. They eventually enjoyed many Saturday night dances at the Y, becoming proficient dance partners and continuing to date, even after Chuck's family moved to Mount Lebanon and he attended an out-of-town boarding school. JoAnn graduated from Coraopolis High School in 1949 as a member of the National Honor Society, with a lengthy list of activities including intermural basketball, softball and baseball, Captain of the Rifle Team, Vice President of the class and Senior Prom Queen.

She attended Denison University on full scholarship, majoring in Biology and working part-time as a waitress in the dining hall. Despite a full schedule and challenging course load, she consistently made the Dean's List and served as Corresponding Secretary of the Delta Gamma Sorority, member of Alpha Epsilon Delta, (National Health Preprofessional Honor Society), and member of the Chemical Society. During this time JoAnn continued her long-distance love affair with her boyfriend Chuck while he attended Dartmouth College in NH. One of her most exciting memories was of being his special date at Winter Carnival.

By her senior year at Denison, JoAnn and Chuck were engaged, and upon her graduation the childhood sweethearts married and moved to Cambridge, MA, while Chuck attended law school. It was there that they started their family before moving back to Pittsburgh in 1956 and settling in Mount Lebanon where they lived the remainder of their lives together.

JoAnn took her role as wife and mother to heart. She considered it her career and primary purpose in life. She shouldered most of the child rearing and household projects, allowing her husband more freedom to devote to his demanding legal career. In turn, he gratefully referred to her as "the wind beneath my wings."

While raising her children and supporting her husband, JoAnn involved herself in numerous activities.
One day she sent away for a few packets of seeds and soon flowers blossomed into gardens surrounding her house. Eventually she joined a garden club where she remained a lifelong, active and contributing member.

During the 60's, she and Chuck helped organize an Investment club for which she ultimately served as president. She had a knack for picking obscure, winning stocks such as Xerox Corp.

She taught herself to play tennis, paddle ball & later golf, and in all three sports, actively competed in league tournaments, often against women half her age. In golf, she nailed two holes-in-one, and could produce the trophies to prove it. Later in life, she and her husband played at some of the top courses in the world including Muirfield, Scotland, Cypress Point, CA, and Laurel Valley, PA.

In the early 90's the couple acquired an old, rundown house known as "Hickory Hill," situated in the magnificent, Laurel Highlands of Ligonier, PA. With help from her close friend Jeannie, (an interior designer), JoAnn transformed the house into a beautiful yet comfortable weekend retreat where in the summer she would golf, monitor the local deer and wildlife and tend to her beautiful garden. In winter, she and Chuck would spend Christmas gathered together with her children and grandchildren, who have wonderful memories of building snowmen, sledding and learning to ski in her back yard.

Throughout her life JoAnn was an enthusiastic bird watcher and maintained an impressive "life list." She would listen to the birds outside her window and could identify each one by their call.
She also loved to read, and never went to bed without enjoying several chapters from one of the many books piled on her nightstand. Her favorite titles spanned a wide range of subject matter, both fiction and nonfiction, but she particularly enjoyed biographies.

Although competitive on the courts, in all other areas JoAnn was a gentle soul. She was unfailingly kind and gracious to everyone she met, treating them respectfully as equals. Always thinking of others, she would never allow others to go out of their way for her. She was modest, unassuming and utterly unpretentious. To us she was simply beautiful, but also devoid of vanity. She was content to remain behind the scenes, never calling attention to herself. In her later years she enjoyed simple luxuries, but she never outgrew her practical, down to earth roots. "A farm girl at heart," she described herself. She loved nothing more than to "dig in the dirt" in her garden. It was there that she was most at peace, and where she felt a spiritual presence.

Given all of her talents, interests, skills and intelligence, along with her fun personality and sense of humor, (or "funny bone" as she called it.), it's not surprising that JoAnn had many, many loyal friends. She cultivated & maintained her friendships throughout her life, corresponding the old-fashioned way in her perfect, cursive script. Every Christmas she sent out hundreds of individually hand-written letters. She never forgot a friend or relative's birthday, anniversary, wedding or christening.

Above all else, JoAnn's family will cherish and remember her as a devoted wife and mother. To her husband, she was, and always will be, his "beautiful bride" and "the love of his life". To her children and grandchildren, she was a truly loving and supportive mother and grandmother. She will be forever missed.

Arrangements are by Slater Funeral Home, 1650 Greentree Rd., Pittsburgh, PA, 15220.
Interment will be private, and a reception and Celebration of Life may be held at a later date, Covid-19 restrictions permitting.

In lieu of flowers, the family suggests donations be made to: Holy Family Institute, Family Hospice, Providence Point Senior Living Community of Pittsburgh, Denison University, the Extra Mile Education Foundation of Pittsburgh, or to a favorite charity of choice.
To order memorial trees or send flowers to the family in memory of JoAnn (Hawkins) Queenan, please visit our flower store.