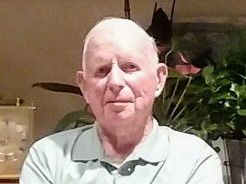 Fred F. Conroy, 83, of Green Tree passed away, peacefully, in his home on Wednesday, May 27, 2020. He was born on December 2, 1936 to Colin and Alice (Wolfe) Conroy. A lifelong resident of Green Tree, Fred graduated from St. James Catholic High School (West End) in 1954. He then attended Connley Trade School, became a carpenter, and was a proud member of the United Brotherhood of Carpenters and Joiners Union for over 60 years.

Fred was a proud Marine who served his country from 1959 to 1965. Fred helped to serve his community by being a long-time member of the Green Tree Volunteer Fire Department and served as the Assistant Chief from 1975-1985. He loved working on projects around the house and was always quick to lend a hand to anyone in need.

Surviving is his wife Judy (Herlinger), of Green Tree; two children, Maureen Conroy, of Pflugerville, TX, Fred Conroy, of Dover, NH; three grandsons, Colin, Greyson, and Macaulay Conroy, of Dover, NH, and special "Unc" to numerous nieces and nephews. He was preceded in death by his father (1988) and mother (1989); and sisters Claire McGrath (1979) and Nancy Davis (1988).

As was his request, there will be no viewing, mass, or funeral service. In lieu of flowers, please make an effort to reach out to a relative, friend, neighbor, or anyone who could use some assistance especially during this time of need. WILLIAM SLATER II FUNERAL SERVICE, Scott Twp, entrusted with the Conroy family arrangements. www.slaterfuneral.com
To order memorial trees or send flowers to the family in memory of Fred F. Conroy, please visit our flower store.