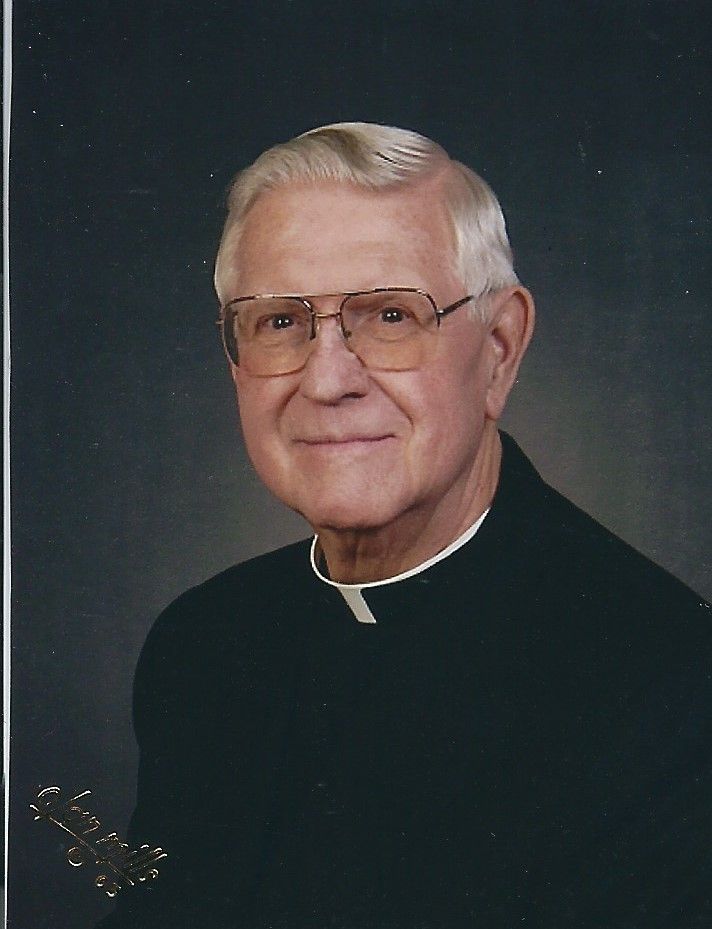 Father Edward J. Trzeciakowski
Age 90, of Crafton, went home to be with our Lord, on Thursday, June 4, 2020. Affectionately known as "Father Ed", he was born on the South Side the son of the late Joseph and Helen (Maciejewski) Trzeciakowski on August 24, 1929. Brother of the late Elizabeth (late Edward) Jankoski; Father Ed was the loving uncle of Mark (Nancy) Jankoski, Steven (Leslie) Jankoski, Helen (George) Tarasovich, Dr. JoAnn Jankoski, Lynda (William) Leeman, late Paul Jankoski, and the late Thomas (Pamela) Jankoski; great uncle of one great niece, 5 great nephews, and one great great nephew. He attended St. Josaphat Grade School and Central Catholic High School in Oakland. After completing high school he matriculated at Duquesne University. At the completion of his sophomore year, World War II necessitated his transfer to a fully accredited seminary where Father Ed entered St. Vincent Major Seminary in Latrobe,PA. In June 1951 he graduated from St. Vincent College with a Bachelor of Arts degree in philosophy. He continued his studies at St. Vincent for his degree in Theology. On June 4, 1955, at St. Paul's Cathedral in Oakland, he was ordained by Bishop John F. Dearden. In the ordination rite, a priest is given the mission to teach, preach and offer sacrifice. His first assignment was to Transfiguration Church in Monongahela, PA, where he served from 1955-1960. He was reassigned to Holy Family Church in Lawrenceville from 1960 to 1966, St. Maurice Church in Forest Hills from 1966 t0 1969 and his last assignment as an assistant was to St. Margaret of Scotland in Green Tree from 1969 to 1971. Finally, the day arrived when Father Ed was appointed as the third Pastor at Our Lady of Lourdes Church, in Burgettstown, PA, where he ministered for fourteen years from 1971 to 1985, Resurrection Church in Brookline from 1985 to 1991, St. Ignatius where Carnegie merged into the community of St. Elizabeth Ann Seton from 1991 to 1994, and his very last pastorship was at St. Alphonsus Church in McDonald, PA, from 1994 to 1999. He retired October 1, 1999. Father Ed resided at the retirement home for Diocesan Priests, St. John Vianney Manor in Crafton. He was the Sunday assistant for Masses at St. Winifred Church in Mt. Lebanon and ministries to the Manor nursing homes as well as the Cloverleaf Estates in Carnegie, PA. Friends welcome WEDNESDAY and THURSDAY 2-4, 6-8pm, William Slater II Funeral Service (412-563-2800) 1650 Greentree Rd, Scott Twp 15220. Additional visitation 9:00-11:00a.m FRIDAY at St. Winifred Church, 550 Sleepy Hollow Rd, Pgh, PA, 15228, where Mass of Christian Burial will be celebrated at 11:00a.m. EVERYONE MEET AT CHURCH. Due to the ongoing Covid-19 pandemic, visitation protocol will follow PA/CDC guidelines for the use of facial mask and social distancing. In lieu of flowers donations suggested to a charity of one's choice. www.slaterfuneral.com
To order memorial trees or send flowers to the family in memory of Father Edward J Trzeciakowski, please visit our flower store.