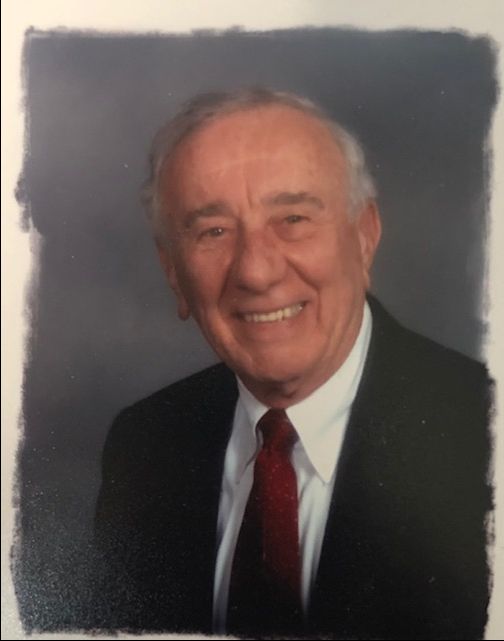 Ernest D. Brightman, 96, of Mt. Lebanon passed away peacefully on April 29, 2022. Loving husband of 65 years to Clare (Rosenberger) Brightman, proud father of Jeffry (Kathleen), Kent (Lori) and Elizabeth (Ken) Ericson, adoring grandfather of Kaitlyn, Katie, Kayla, Ryan, Blake, Sarah and Ava. He is also survived by his many cherished nieces and nephews, and preceded in death by his parents, brother, Ralph and sister, Rena.

Ernie served in the U.S. Marine Corps in World War II as a crew chief on the aircraft carrier USS Puget Sound with the 454 Torpedo Dive Bombing Squadron. His aircraft carrier was next to the USS Missouri, where Gen. Douglas MacArthur signed the peace treaty that ended the war. After serving in the Marines, Ernie spent 26 years at Allis-Chalmers, and later as an insurance agent for Monarch and New England Life and formed The Brightman Company providing insurance products. His greatest pleasure was spending time with his grandchildren, family and friends. Ernie will be missed because of his outgoing and warm personality.

A memorial service will be held at 10:00 am on Wednesday, June 1 at Our Lady of Grace, 310 Kane Blvd, Pittsburgh, PA. Interment will follow at Queen of Heaven Cemetery, 2900 Washington Rd, McMurray, PA.

Expressions of sympathy may be shared with the family at slaterfuneral.com. Arrangements entrusted to WILLIAM SLATER II FUNERAL SERVICE (412-563-2800), Scott Twp. www.slaterfuneral.com
To order memorial trees or send flowers to the family in memory of Ernest D. Brightman, please visit our flower store.