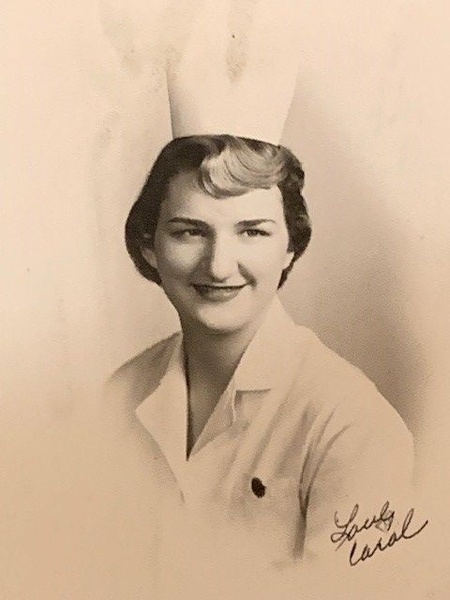 Carol Updike Kline passed away peacefully the morning of December 19, 2021. She is survived by her beloved husband of more than 65 years, Lloyd Kline of Mt. Lebanon PA, her daughter Susanne Kline of Castle Shannon, her son Stephen (Marilee) of Mt. Lebanon, and her grandson James Kline of the 2021 Mt. Lebanon 6A Pennsylvania State Championship football team.

Carol was born to Dorothy and Carroll Updike in Carrick on September 14, 1934. As a child during WWII she and her father would board the trolley to travel to Library PA to tend their "victory garden". In high school Carol played basketball for the Bethel Park Blackhawks. Carol attended nursing school at Presbyterian Hospital, a career choice which proved pivotal, as she met her future husband Lloyd while he was a patient on her floor at Presbyterian Hospital in January 1955. They married on August 11, 1956 at First Bethel Methodist Church and enjoyed a reception at her parents' home in Bethel Park. In their early years of marriage they lived in Oakland while Carol continued to work at Presbyterian Hospital as Lloyd finished his degree at Pitt with support from the GI bill.

Soon after the birth of their daughter Susanne, Carol and Lloyd moved to Bethel Park. A few years after their son Steve was born, they relocated to Upper St. Clair. Once both the children were in school, Carol returned to her nursing career, first at Montefiore Hospital in Oakland and then to St. Clair Memorial Hospital. This career choice also proved significant, as it led to the Klines' relocation to Willow Drive in Mt. Lebanon where Lloyd and Carol lived for 40 years before moving to Concordia of the South Hills in 2017.

For years Carol was a registered nurse at St. Clair and later assumed the role of head nurse of a medical-surgical floor. In the autumn of her career she assumed a nursing role in the psychiatric unit of St. Clair. After a 25-year career at St. Clair Hospital, Carol retired…briefly; she returned to the hospital, working the information desk and greeting and directing patients and families until a hip injury led to her ultimate retirement.

In retirement Carol and Lloyd travelled annually to Sunset Beach North Carolina with best friends from their USC neighborhood. They also travelled to Europe twice: once to England with dear friends and later to the Netherlands while Sue was working there.

Carol was a vigorous woman. For years she walked to and from work in the wee hours of the morning. She loved to sit on her front porch and talk with the neighbors, some of whom became like family. Carol loved throwing picnics on the Fourth of July. She was a master pie baker, and she passed along her tips to son Steve who carries the mantle. She loved music: Neil Diamond and Fiddler on the Roof among her favorites. And she relished her role as grandma to James. This included countless books and movies, numerous trips to Bethany Beach, and ultimately concerts and sporting events.

Special thanks to Carol's caregivers and staff at Concordia of the South Hills. Family and friends will be received at WILLIAM SLATER II FUNERAL SERVICE (412-563-2800) 1650 Greentree Rd, Scott Twp 15220 Wednesday December 29, 2021 from 11 a.m. to 1 p.m. In lieu of flowers memorial donations may be made to the americanbrainfoundation.org. www.slaterfuneral.com
To order memorial trees or send flowers to the family in memory of Carol Updike Kline, please visit our flower store.