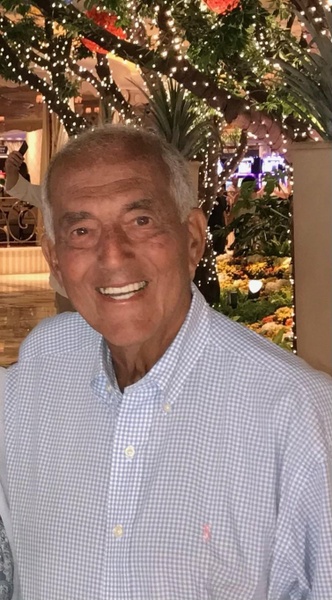 Anthony V DeCello, age 86, of Mt. Lebanon PA, on Thursday, March 31, 2022 peacefully went from the loving arms of his family to the loving arms of his Lord and Savior Jesus Christ and his son Marc. Son of the late Anthony DeCello and Jennie DeCello, brother to the late Barbara DeCello Fine and Rick Fine and John DeCello, loving grandson of the late Frank and Corrine Scardina. Beloved and devoted husband to his wife Beverly J. DeCello. Adoring Father to Anthony DeCello III, the late Marc DeCello and Lisa Marie, Michael DeCello, Lori Ann DeCello Winschuh and her husband Michael. Proud and loving grandfather of Matthew Joseph, Luke, Maria Anna Grace, Michael Anthony, Nicolette (Nicoletti) and Matthew (Matty T), Daunte, Angela, Gianna, Sergio, Diego, Nicholas and Dominic. Born and raised in a loving home in Farrell, PA. He started serving Mass at age 4 1/2. Basketball was his passion. He helped lead as the point guard his high school basketball team with close friends Julius McCoy and Coach McClusky in 1952 to their first state championship in Philadelphia. Their championship game and season was later made into a Broadway play titled "A Championship Season". Anthony, Julius and Coach McClusky traveled to NY for the premiere in 1972. He went on to play on a basketball scholarship at Washington & Jefferson college and was a member of Phi Psi fraternity. He was an ROTC second lieutenant in San Antonio Texas. Anthony went on to attend law school at Duquesne University and became a criminal defense attorney. His other passion was being a sports agent mainly with the Oakland Raiders among them Jack Tatum, Clarence Davis, Neil Colzie and Otis Sistrunk. Anthony and his wife Beverly loved to go ballroom dancing on the weekends and attend all of their children's sporting events. Anthony loved to coach all of his sons and their friends in Little League baseball. The highlight of his life was his beautiful grandchildren who adored him. Anthony always lit up a room with his beautiful smile, his quick wit and his genuine kindness toward others. Though we are heartbroken by our tremendous loss, we will forever carry Anthony "Grandfather" in our hearts until we meet again. Friends welcome 4-8pm, FRIDAY, WILLIAM SLATER II FUNERAL SERVICE (412-563-2800) 1650 Greentree Rd, Scott Twp 15220. Mass of Christian Burial 1:00pm, SATURDAY, Our Lady of Grace Church (St. Michael the Archangel Parish). Burial to follow in Queen of Heaven Cemetery, McMurray, PA. In lieu of flowers donations suggested to St. Jude's Childrens Research Hospital, 600 Waterfront Dr #210, Pittsburgh, PA 15222 or to the Shriner's Hospital's for Children, 2900 N. Rocky Point Dr.
Tampa, FL 33607. www.slaterfuneral.com
To order memorial trees or send flowers to the family in memory of Anthony V. DeCello, please visit our flower store.